Programme:
This programme is a selection of pieces that show the various styles of writing for the Viola da Gamba. From the earliest Spanish Rececar to the Abel Arpeggiata that is almost from the Classical period, all of these pieces have their own challenges and intricacies that make the viol the versatile instrument it is today. Matthew will play three instruments during this performance, showing the varied repertoire for different types of viols. He is going to be playing a Treble Viol by Timothy Soar after John Rose (2021), a 6-stringed Bass Viol By David Rubio after Chris Meares (1975) and a 7-stringed Bass Viol by François Bodart after Michael Colichon (1995).

Please note that the time of these lunchtime concerts has now changed – from now on they will commence at 1.30pm.  Regrettably, at the moment, we will be unable to serve refreshments that have been associated with these concerts in the past, although we hope that this may be able to resume again at some point in the future.  As previously, admission to these lunchtime concerts will be free, although contributions to a retiring collection will be invited, proceeds of which go towards the Cathedral’s organ scholarship.

Biography:
Matthew Farrell graduated from the Royal Welsh College of Music and Drama in July 2020, where he studied the Viola da Gamba under Dr Lucy Robinson, and Double Bass under David Stark. Matthew was awarded the Simon Clarkson Memorial Award, which is awarded for general musicianship to the best all-round musician in the College.

During his time at RWCMD, Matthew’s love of early music flourished. Although his undergraduate degree was in the modern double bass, the viol has become his new favourite instrument. Having only started to play in October 2017, under Dr Lucy Robinson, Matthew picked up the instrument quickly and decided to focus a high proportion of his time on it. His love of the viol has grown fast, and in his fourth year at the RWCMD, Matthew performed two of his three performance exams on it, playing the Bach G minor sonata and a concert of music from the court of Louis XVI of France. For his degree, Matthew wrote his dissertation on the Music and Politics of the English Civil War, focusing on how musicians lived and worked during these times. As a result of this dissertation, he was asked to give a talk to the Viola da Gamba Society. Due to COVID-19, this lecture was given on zoom, and had participants from all over the world, including America and New Zealand.

As well as learning with Lucy, Matthew has gained experience through lessons and masterclasses with Sarah Cunningham, Vittorio Ghelmi, Reiko Ische, Jonathan Manson, Rachel Podger, Imogen Seth-Smith, and Sam Stadlen. Whilst on the Marnaves Summer Baroque Courses in 2018 and 2019, he worked with Margaret Faultess, playing violone in the large baroque ensemble, as well as receiving coaching playing bass viol in chamber ensembles and the course’s viol consort. As well as playing in masterclasses at RWCMD with Rachel Podger, Matthew has also played in the Brecon Baroque Festival Orchestra (director Rachel Podger), playing alongside members of Brecon Baroque, and performing music such as the Mozart Prague Symphony on period instruments, as well as Benda’s Concerto for Harpsichord in F minor with Chad Kelly at the Harpsichord.

In addition to performing on the bass viol as a soloist, Matthew plays all instruments in the viol family. In September 2018, he co-founded the viol consort Arculo, with whom Matthew has played many concerts as well as playing an accompanying role at Evensongs with cathedral choirs. During the coronavirus Pandemic, Arculo performed two live streamed performances and released an album of three part music. As an ensemble player, Matthew has also performed on the violone, notably a concert with the Exeter Cathedral Choir, playing the Vivaldi Gloria, Zadok the Priest, Bach Cantata (BWV 194) and Handel’s Organ Concerto in F. In January 2020, Matthew successfully auditioned to be a member of Rosafresca, a Bristol-based ensemble that specialises in performing Renaissance music from the English and Spanish Courts on Renaissance instruments. 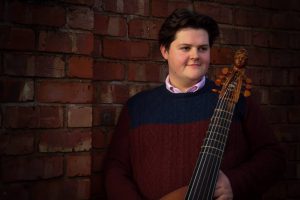