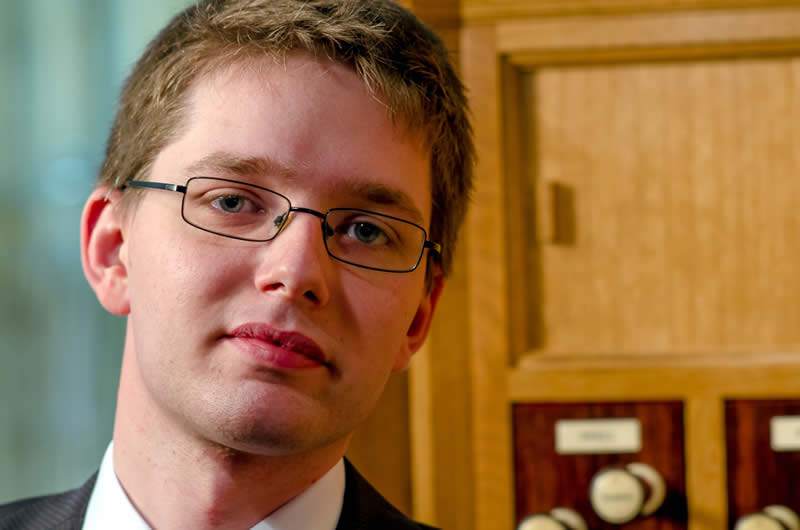 Simon Hogan is the Assistant Director of Music at Southwell Minster, having previously served as Organ Scholar at St Paul’s Cathedral.

Born and educated in Bristol, Simon has been passionate about cathedral music since becoming a chorister at St Mary Redcliffe, Bristol. There, as a young boy, he spent four years singing three weekly choral services, touring, recording, and nurturing his increasing interest in the organ; this culminated in him becoming the church’s first Organ Student at the age of 16. Whilst still at school Simon became Organ Scholar at Bristol Cathedral, and was subsequently awarded the organ scholarship at Salisbury Cathedral. During his year in Salisbury, Simon regularly accompanied the cathedral choir, gave recitals on the renowned Willis organ, and worked in the Cathedral School.

Upon leaving Salisbury, Simon took up a scholarship to read Music at the Royal College of Music, where he subsequently graduated with first class honours. During this time he studied with David Graham, Sophie-Véronique Cauchefer-Choplin and Robert Quinney, and held posts at Ealing Abbey, St Sepulchre-without-Newgate, and King’s College, London. In July 2011 Simon took up the organ scholarship at St Paul’s Cathedral where, in addition to regularly giving recitals and accompanying the world-famous choir, he performed at the Service of Thanksgiving for the Queen’s Diamond Jubilee. Simon moved to Southwell in September 2012 to take up his current position at the Cathedral, where his duties include directing the Minster Girls’ Choir, playing for the daily routine of services, and running the Minster Chorale, the Cathedral’s voluntary chamber choir.

As a recitalist, Simon has performed a wide and varied repertoire in venues around the UK, and has featured on many commercial recordings. Simon is also the principal organist for JAM, an organisation set up in memory of John Armitage which commissions and performs compositions by today’s leading composers. Simon’s debut solo recording, in Priory’s Great European Organ series, was released in the summer of 2015.