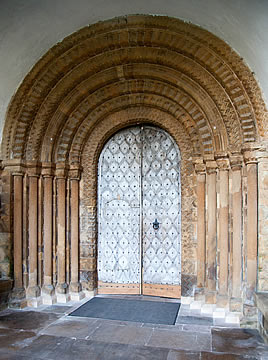 As you enter this Cathedral, which was built nearly 1000 years ago, you pass through one of the best remaining Norman built porches that exist in this country. The 14th century oak door is surrounded by seven orders of moulding including one with ‘beaks head’ decoration. 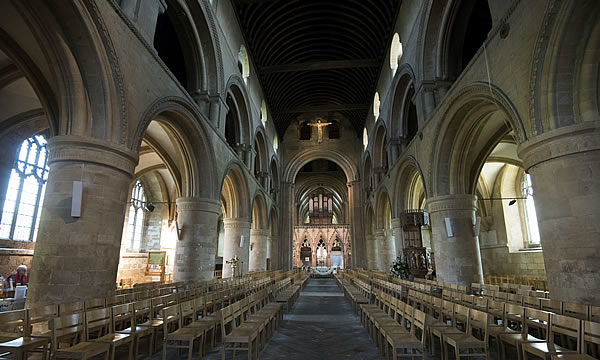 Here you can see Norman Romanesque architecture with three different levels, creating a Triforium and Clerestory supported by great stone pillars 16 feet in circumference. The construction of this nave was started in 1108 and it took 50 years to complete. The oak roof was destroyed by fire on November 5th in 1711. 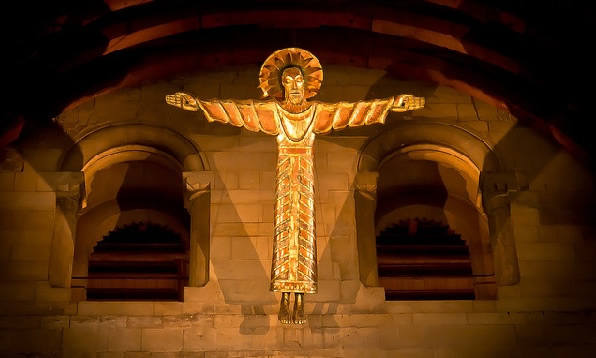 Under the barrel vaulting and above the great arch at the east end of the Nave is Christus Rex. Made of elm and oak and overlaid with burnished copper and gold leaf, it is 10 feet tall and weighs 7 cwts. Christus Rex was created by Peter Eugene Ball in 1987. 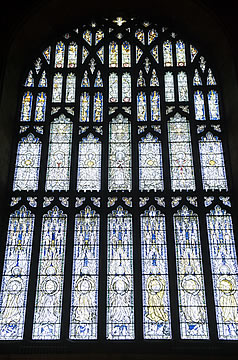 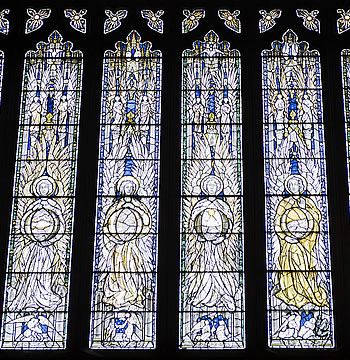 This window was installed in 1996. It was designed and painted by Patrick Reyntiens and made in York. Reyntiens described it as “a great gathering of angels enjoying being with God, just all joy and worship”. 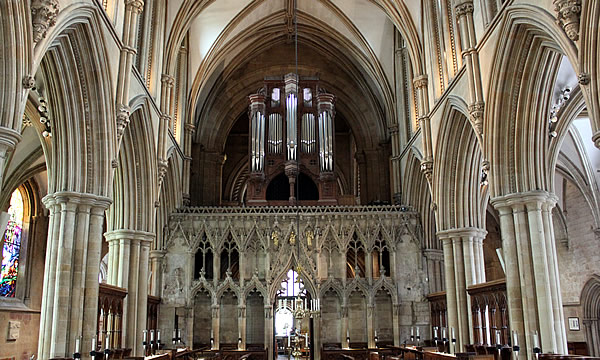 The Pulpitum separates the Quire from the Nave. The numerous stone carved figures range from solemn Kings and Queens to humble and sometimes comic workmen. It was built between 1335 and 1340. 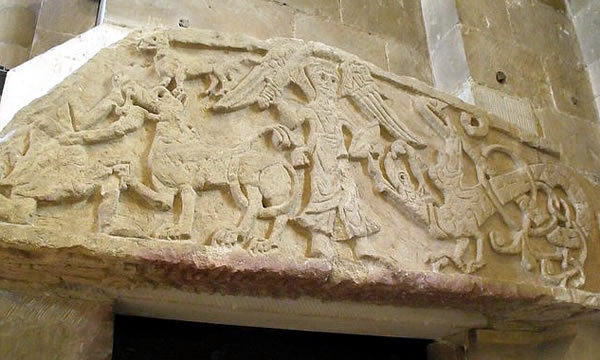 This may have been part of the Saxon Minster that stood on this site and is dated between the 9th and 11th centuries. The Archangel Michael is warding off a dragon with his sword while David defends his sheep from a lion. 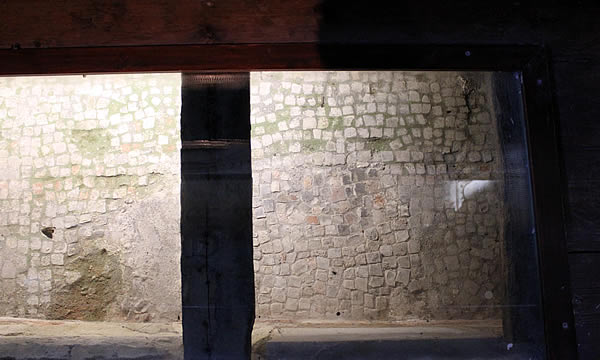 The bread pews date from the 15th century. This is where money and bread were once distributed to the needy. A fragment of mosaic is visible under the floor. Many of the tesserae are probably Roman and the mosaic formed part of the Anglo-Saxon church, which was demolished by the Normans. 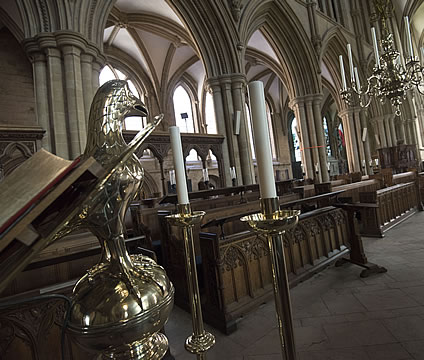 This part of the church was rebuilt and extended in 1240 to twice its previous size. The architecture is Early English Gothic.

The Quire stalls were installed in 1886 and are examples of outstanding wood carvings completed by Charles Henry Simpson. The six ‘senior’ clergy stalls include "Wolsey’s stall"’. Cardinal Wolsey spent the last summer of his life here in Southwell.

The brass eagle Lectern was originally at Newstead Abbey. At the dissolution of the monasteries it was hidden in a lake for more than 250 years and given to the Minster in 1805. 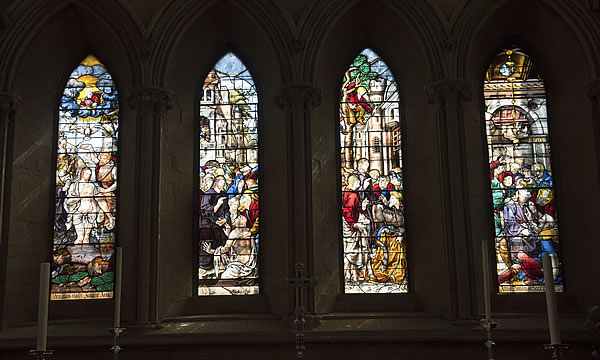 The lower windows date from 1528 and were created by Jean Chastellain for the Temple church in Paris. After the French Revolution the church was destroyed and these windows were found in a pawn shop in Paris. 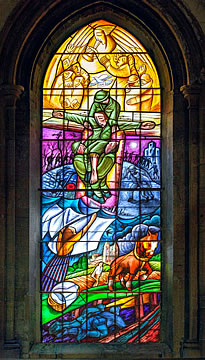 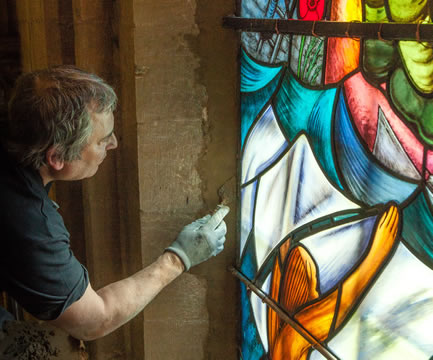 This outstanding window was designed by Nicholas Mynheer in 2014. It is a memorial to the men from Nottinghamshire and Derbyshire who lost their lives in the First World War. The design seeks to reflect the need for forgiveness and reconciliation

View a large image of the window. 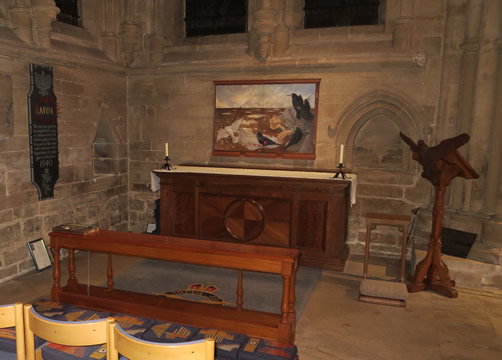 The altar was made in 1919 by RAF apprentices from broken propeller blades found in France. The Triptych is by Hamish Moyle.

A memorial tablet by Ronald Sims commemorates the victims of the Katyn Forest Massacre, in which 14,500 Polish prisoners of war were killed. An urn containing soil from the forest is held within the wall behind it. During the second World War many Polish refugees came to Britain to fly with the RAF or to work the Nottinghamshire coalfields. The large Polish community in the county holds an annual service here. 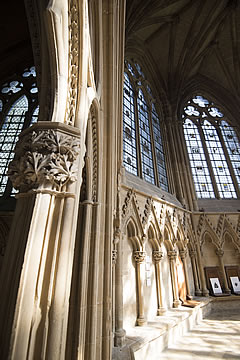 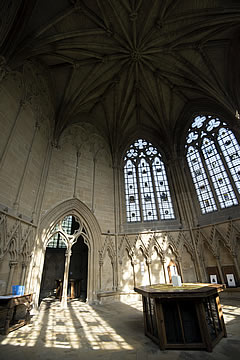 The Chapter House is now reopen after the installation of a new cantilever lift which now provides full access to this glorious part of the Minster.

The Chapter House was built beside a baptismal pool at the end of the 13th Century. It is decorated with rich naturalistic stone carvings. These world renowned leaves are based on close study of local hedgerows, yet contain green men and creatures both real and fanciful. At least 16 varieties of foliage demonstrate dexterity and remarkably accurate observation. This Chapter House is one of the most beautiful buildings in this country.