Southwell Minster Choir Association (SMCA) celebrated its thirtieth anniversary in 2019. At 11.00am on Saturday 24 June 1989, a meeting was held in the Archbishop's Palace "to establish a Southwell Minster Choir Association" which would "act as a support group to the Choir". Mr Andrew Johnston, Lawyer, agreed to draft a constitution, and "a practicable income would be an annual subscription, initially, of £8 for individual membership, or alternatively, of £12 for family membership".

Over thirty years SMCA has grown and has supported the Cathedral Choir in many and varied ways: funding annual social events and trips for the Choristers, singing lessons and tours abroad; presenting the annual showcase for the choir, the Music Foundation Summer Concert, and the ‘Music in the Great Hall’ concert series (now 'Music in the State Chamber'); producing the annual Christmas card, and many more. SMCA also supported the then Girls’ Choir’s first CD release ‘Christus Rex’, and their 2016 CD 'Sing we of that Mother Blest', as well as their tours to Italy and France.

It often funds the commissioning of new music for the Music Foundation, including the St Mark Passion by Guy Turner, and an Easter anthem by Robert Busiakiewicz; 2021 has seen the commissioning of a new anthem from Roxanna Panufnik, partly to celebrate the completion of the Southwell Leaves Project, which will be premiered in 2022.

Each year, SMCA hosts a concert to showcase the Music Foundation. These vary in nature, from full orchestral concerts with the City of London Sinfonia through to smaller-scale repertoire for unaccompanied choir. Until recently this annual showcase took the form of the St Cecilia Concert each October; in 2019, the Cathedral Choir performed music by Byrd, Tallis, and arrangements of spirituals by Michael Tippett and Moses Hogan. From 2022, this concert will now take place in the final week of the summer term, as a summer showcase. 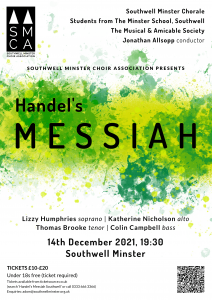 Every year, Southwell Minster Chorale joins forces with an orchestra and professional soloists to present Handel’s much-loved Messiah. At this year’s concert, on Tuesday 14 December 2021, the Chorale is joined by students from the Minster School, and for the first time, a period instrument orchestra, The Musical & Amicable Society.

Why not become a member of SMCA and give further support to this unique Choral Foundation which is at the heart of the Minster’s worship? Subscription is just £15 a year, and your contribution will significantly help towards helping to maintain a living tradition, described by George Herbert as his 'heaven on earth'.