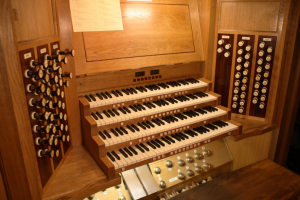 Discussions regarding a new Screen Organ took place from 1989 and 1994 between the Rector Chori (Paul Hale) and organ experts. John Norman (then adviser to the Cathedrals Fabric Commission for England), organ builders N. P. Mander Ltd, Stephen Bicknell and Ian Bell were particularly helpful in clarifying what could or could not be done, once the decision had been taken to preserve (on historical and financial grounds) the Caröe case.

A new case had been proposed and drawn by the Minster’s Architect, Martin Stancliffe, as an alternative to which it had been hoped to add a ‘Chair’ case to the existing case in emulation of Southwell’s eighteenth-century case, but constructional difficulties prevented this. At this point Nicholson of Malvern were invited to tender as their recent work at Portsmouth Cathedral and at Birmingham Cathedral suggested that they would have the ability to design and voice a tracker-action organ to fit within our relatively small case, with the action going through ninety degrees as the console had to remain on the north side.

During 1994, plans with Nicholson had been refined and almost finalised, when in December Paul Hale was told of a fine 1868/1906/1922 Nicholson organ in St Peter’s Church, Malvern Wells, which had just been closed. It had just the tone envisaged for the new Screen organ, and so it was decided to buy it and use its pipework as the basis of an otherwise new instrument. The Diocese of Worcester kindly arranged for Southwell to purchase the organ. Meanwhile a generous legacy from the late Charles Cope meant that work could proceed. In March final permission was granted by the Cathedral Council for a total project cost of £320,000.

The Screen Organ scheme was approved by the C.F.C. on March 23rd 1995. The contract was signed in April and work immediately began in Nicholson’s works, then at Quest Hills Road, Malvern. At the same time the case was cleaned and repaired, the old organ having been stripped out by voluntary labour, the pipework taken by Wood of Huddersfield for scrap and re-use elsewhere. Some of the 1959 and 1971 ranks duly found their way into other organs. By mid-November Nicholsons were ready to erect the organ in the Minster. That work proceeded steadily into the New Year when three months’ voicing and regulating by Dennis Thurlow and Guy Russell began.

The instrument was handed over at 4 p.m. on Maundy Thursday, just in time for Assistant Organist Philip Rushforth to work up Vierne’s Messe Solennelle for the organ’s first appearance, on Easter Day 1996. Later that year an opening series of concerts featured Roy Massey, John Scott, David Sanger, Paul Hale and Philip Rushforth.

Incorporated in the English but eclectic specification are Copeman Hart digital electronic basses for the two 32ft stops and the 16ft Open Bass (wood). There was no room for these within the organ as ranks of pipes, and such had been the success of Copeman Hart’s temporary organ, that it was felt worthwhile employing their expertise to produce a satisfactory solution. To provide the deep bass necessary for the digital ranks a very large cabinet was mounted above the stairway on the South side of the Screen. Four smaller cabinets were mounted within the organ, near the Pedal soundboard. The extreme bass is helped by a 16ft column loudspeaker within the Nave Organ, to which instrument digital 32fts were added at the same time. Circuitry was incorporated allowing most of the Nave Organ to be played from the Screen console, to help with large congregations and processions.

The Screen organ has four manuals and pedals, 51 speaking stops, 67 ranks of pipes and 3,725 pipes. It has proved its great worth from that very first Easter Day and has been appreciated in daily services ever since, in broadcasts and in the many recitals given on it. Unfailingly reliable and a joy to play, the Nicholson organ has proved to be a triumph of engineering design, excellence of construction and beauty of tone.